There are a few changes you can make to your home that will save you money and help protect the environment at the same time. Study the following options to see if there is room for improvement in your home.

Up to 40 percent of the heat that is lost in the home is through the roof and surrounding walls. This percentage can be reduced significantly by installing simple loft insulation costing between £200 to £300, resulting in an average saving of £150 per year. Cavity wall insulation prices start from £130 with an average saving of £100 a year. Obvious improvements such as double glazing will also reduce heat loss through the windows.

At present, homes across the UK can use up to 1000 litres of water per day. One option is to install a water meter along with low-flush toilets. You can also take advantage of rainwater, by installing a harvesting system which can reduce your water consumption by as much as half whilst being used with toilets, washing machines and gardening. Systems such as this can start from £3500.

Generate your own Energy

Photovoltaic (PC) Cells or solar panels as we know them, operate by capturing solar radiation and converting it into electricity. An average home with a south facing roof could potentially generate half of its own needed energy using these cells. Systems vary in prices but are expected to be paid back within at least ten years. Wind turbines are also an option, but only effective in certain locations. It is important to carry out a wind assessment beforehand – Prices for wind turbines start from £1000.

Make small change around the home

Lighting in the home accounts for around 15 per cent of your annual electricity bill, so it is important to change over to energy saving bulbs throughout your home. Each bulb can save up to £7 per year! Installing an efficient condensing boiler is expected to save £150+ per year, whilst investing in a jacket and lagging for your hot water cylinder and pipes will pay itself back within one year of installation.

A couple based in Oxford have found a novel use for the River Thames, running just opposite their newly built home. Water from the free flowing river provides the raw material required for a water based heat pump which is being utilised to heat the water in their home. The principle is the same as a ground source heat pump, which extracts heat from the local environment, which in this case is the River Thames.

Combined with high insulation, and correctly glazed windows the demand for heating is less here than in the average home. The combination of the Thames heat pump and solar panels provides enough energy to warm both their home and hot water supply. Taking advantage of these new ecosaving energy sources could mean that we are getting ever closer to that cost-free shower first thing each morning! 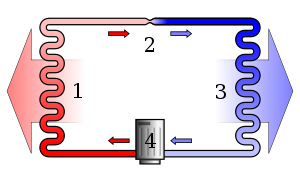 So what’s the science behind it? Both air and water source heat pumps are enviromentally efficient ways of transforming natural heat sources to benefit our homes. Air heat pumps can be utilised for heating the home, whereas water based heat pumps can take advantage of the heat in a lake or from the ground. This technology can easily be explained when looking at your fridge at home.  A small heat pump located on the back of the fridge works to move any heat from inside the fridge to the outside, thus cooling down the inside.  For more information on heat pumps please visit the following link: http://www.ecoheatpumps.co.uk/heat_pumps.htm

It’s a well known fact that the environment has become an important, key issue in today’s modern society. People are recycling more, driving more eco-friendly cars and turning TVs off standby. This ‘eco-fever’ is passing over to the home improvement sector, with consumers considering the environment when purchasing that new kitchen or bathroom.

A recent survey carried out by the KBSA showed the following:

It seems that more and more of us are considering our planet before deciding on final plans for our homes.

Give yourselves a pat on the back!